When I asked David Bradley, the director of The Diary of Anne Frank, what he hopes for this production, he told me that he hopes that people engage with it by coming to see the show and being open to having an experience. Fortunately, People’s Light in Malvern makes engagement possible for a wide variety of audiences, including people with disabilities.

As a Jewish woman, I view stories about the Holocaust primarily through a Jewish lens. I think of my ancestors, my experiences in Israel, and the recent rise in anti-Semitism in America. But as a disability advocate and civil rights activist, I saw this current production of The Diary of Anne Frank in a new light. The last time I saw the play was as an elementary school student at a Jewish day school. More than 15 years later, my perspective has changed along with my life experience. I’ve learned about ICE raids targeting immigrants in Philadelphia and been to rallies to save the Affordable Care Act so that people with disabilities can access health care. Watching the actors portraying the Frank family hide in fear of being discovered and persecuted has new resonance. And hearing Anne Frank’s powerful words about her pride and her faith in humanity strike me in a different way.

I am particularly in tune with the words of Anne Frank and the script of this production because I have been helping with open captioning, an accessibility offering that accommodates people who are deaf and hard of hearing. At open captioned productions, an operator from a team of staff and volunteers uses a computer program to display the actor’s lines on a screen to the side of the stage. 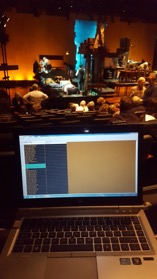 The computer that displays open captioning during performances.

People’s Light is Committed to Accessibility

People’s Light has demonstrated a commitment to accessibility by offering frequent open captioned performances as well as audio description, sensory tours, and an intentional welcoming of service dogs. Audio description provides narration through personal headphones to highlight important action on stage for people who are blind or have low vision. Sensory tours also accommodate people who are blind and have low vision by providing an opportunity to be in close proximity with key props (such as Anne’s shoes and Mrs. Frank’s music box) in order to spark a visual memory when those props are used during the production.

Marcie Bramucci, the Director of Community Investment at People’s Light, explained that the content of this production was “a cue to push accessibility efforts even further.”

“While the staff members of People’s Light are always mindful of access,” she said. “This story highlighted an opportunity to reach out to people who may feel excluded, either intentionally or unintentionally.” They ramped up accessibility offerings and made open captioning available at every Wednesday, Friday, and Sunday performance as well as during the final performance on Saturday March 31st.

After this past Sunday’s matinee performance, People’s Light hosted a diverse panel to discuss identity and tradition. The conversation was one in a four-part series intended to open a conversation and create a range of spaces and opportunities for connection. They have also held informal lobby chats, post-performance discussions, and more. During Sunday’s panel, high school students Madina and Salawat shared their experiences as immigrants (from Afghanistan and Sudan respectively) and their commitment to preserve and honor their identities. Rabbi Tiferet Berenbaum, an African American woman, talked about her journey to Judaism and the intersectionality between her race and her religion. Disability, itself, is highly intersectional. It impacts all races, ethnicities, socioeconomic statuses, religions, genders, and sexualities. 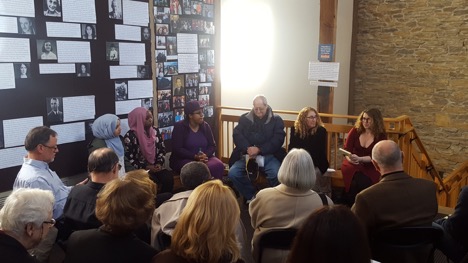 Seeing The Diary of Anne Frank again reaffirmed my commitment to creating a world that prioritizes accessibility, inclusion, and respect. I encourage you to go see the production and I hope it moves you, too. As Anne Frank wrote in her diary, “how wonderful it is that nobody need wait a single moment before starting to improve the world.”

Check out peopleslight.org to see the schedule and purchase tickets to an upcoming performance. Audio Description is available for the 2pm matinee on Saturday March 24th and and Saturday March 31st. Open Captioning is offered every Wednesday, Friday, & Sunday performance, plus the final performance on Saturday, March 31 at 2PM. Sensory touch tours are available before every audio described performance. Service animals are welcome at all performances at People’s Light and Canine Partners for Life will host a demonstration session of their work training service animals on March 31 at 1PM (prior to 2pm matinee).